Below is a shortlist of stories we’ve collected or you can also find many more stories that exist as reviews on multiple independent websites – sites such as Solar Reviews, Better Business Bureau, Angie’s List, etc. Our reviews are why we claim the title as the highest-ranked solar installer in New England.

Plus, if you’re also interested in seeing how solar might work on your own home, definitely check out the New England Clean Energy Virtual Showroom. In it, we’ve brought together 100s of images so you can see solar installations by house style, roof materials, town, and more. If you’re not sure of your computer skills, we suggest starting with our Showroom Tutorial on how to find the right example systems for you. John and Mary Fletcher decided to take the plunge and use New England Clean Energy as their solar installer in 2018. Although they initially made this decision in order to lower their monthly electric bill, the benefits to the environment were definitely a plus for them as well. Read their story.

Kathy Bellisle and her family started looking into solar back in 2008. It just made sense to her and in particular, she liked how it would have such a positive impact on the environment. But financially, it was still a very rough go. That is until in 2015, some seven years later, when it all started to look doable and she and her family took the plunge into solar for their Foxboro home. Read her story.

In an effort to amplify the diverse voices of our past customers, we decided to conduct interviews in hopes of helping those who are considering going solar. We asked our customer Chris Siano, a resident of Bolton MA,  seven questions regarding his installation experience, solar journey, and insight on choosing New England Clean Energy as his solar installer. Read his story.

Save The Planet, Install Panels Susanna Szeto and her husband from Lincoln, MA have been passionate environmentalists for decades. They decided to install solar in their home after being inspired by a neighbor who had just installed a beautiful system nearby. Despite the financial perks, Susanna was motivated by her drive to be good to the environment. Read their story.

Flavio Fernandes considers himself a bit of a tree hugger. He initially decided to install solar on his Westford property in October 2013 for two main reasons: he felt like he was using a lot of electricity and bigger than that he wanted to be part of the solution instead of part of the problem. So, for Flavio installing solar was all about the environment. His overall goal was to essentially make more power than he needed so he could help with the environment. Read his story.

Two is Better Than One: Installing Two Homes With Solar Tom and Heidi Sikina haven’t just installed one solar panel system, but two since New England Clean Energy opened. The first system was installed in Acton in 2007 and then again after a move to Harvard in 2011. Read their story.

Selling Your Home With Solar A Q&A with Mike from Hudson, MA, whose 10,695-watt system went live in July 2014. Mike answers questions including “Why did you go solar?”, “How has solar impacted your electric bill?”, and “Why did you choose New England Clean Energy?” Read his story. 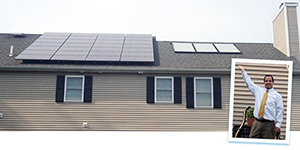 When Joel, an attorney in Bolton, MA, first researched solar energy, a PV system cost around $80,000. Many an early adopter understands this tale of woe. “With no tax breaks or SREC credits, the cost was prohibitively high,” he says. Several years later, federal and state incentives changed the equation considerably. Read his story.

It’s Not About the Environment Dave from Berlin, MA, makes purchasing decisions based on quality and aesthetics, not environmental benefit, and he’s not ashamed to admit it. Consider it progress, then, that he owns an electric car and a solar electric system, which now come in high-performance, aesthetically pleasing packages. Read his story. George and Margaret have always been environmentally conscious. They are diligent about recycling and water use, and switched to energy-efficient light bulbs and programmable thermostats years ago. But solar power, which was on their radar since the 1980s, was just a dream until the town of Harvard joined the Solarize Massachusetts pilot program in 2011. Finally, solar became affordable. Read their story. If you called Liz and Robert solar zealots, they wouldn’t be offended. Between 2007 and 2009, they installed in their Maynard home a two-panel solar hot water system, a solar attic fan, and a 4,000-watt, 20-panel solar electric system. They did all of this a few years before the payback period for solar electric dropped to 4-8 years, but they don’t regret being “early adopters”. Read their story. As a self-proclaimed “Baby Buster”—the post Baby Boom generation—Ellen of Northborough, MA remembers learning about environmental responsibility in elementary school. Even then, she loved the idea of creating power from nature. So by the time she was an adult with the financial resources, installing a solar electric system was a no-brainer. Read her story. Like many retirees, Jerry and Christine of Weston, MA were concerned about rising energy costs. Their NStar bills kept going up, and they knew it would only get worse. When they first looked into solar as a possible alternative, they knew very little about how it all worked. So they were very pleased to learn about the programs offered at the time to support solar installations. Read their story. Kilowatt-hours, utility rates, SREC prices, rebate amounts, tax credits, net costs…the variety of numbers associated with installing solar energy systems can be mind-boggling. But for those with an appetite for data, like Eric of Marlborough, MA, solar-related numbers deliver a lot of satisfaction. Read his story. Solar energy may not be on the traditional retirement planning checklist, but it sure worked out for Gary and Lynda of West Brookfield, MA. A few years before retiring, Gary – whose jobs included U.S. Army captain and police officer, and Lynda – a lab technician, started looking for ways to stabilize expenses in anticipation of living on a fixed income. Read their story. Sure, the hype on solar sounds good. But does it really deliver? Ask New England Clean Energy customer Ben, who had us install a 5,886-watt solar electric system on his Chelmsford, MA home in January 2014. Two years later, he shares his solar results. Read his story. Is it your turn to go solar and join the thousands in New England who have shifted their existing electricity budgets into their own clean solar? Contact us today to see what solar can do for you.