According to Energy Price Choice, around 90% of consumers don’t know what rate they pay for their electric usage. If you’re part of that majority, don’t fret. Many utility bills can be complex to read and the rate is not always obvious. Before you go solar it’s important to know how much you’re paying on electricity each month so you can accurately see your savings once your system is installed. While our solar consultants do most of that math, it’s imperative that our customers know the basics so they can understand where and how their electric bill is being reduced. As Sy Syms used to say in his TV commercials, “An Educated Consumer is our Best Customer”.

To start, note that your specific bill may vary in format and layout from another utility’s (or what I’ll use in our example), but they all will share the same basic format or general “formula”. So once you understand the general formula, you can likely figure out any particular bill.

What you’ll likely notice first is that  your bill shows your electricity usage in units called “kilowatt-hours” (KWh). This is calculated by dividing the watt-usage of an appliance by 1000. On your bill, you’ll see your utility’s calculations of electricity consumed multiplied by the cost of that electricity (normally written in cents). According to the U.S. Energy Information Administration, most Americans pay between 10 and 20 cents per kilowatt hour of electricity. Although in Massachusetts costs are closer to $0.24 kWh for the two large shareholder owned utilities: Eversource and National Grid.

Energy Price Choice provided an example calculation: An average air conditioner that uses about 3,500 watts per hour running for 12 hours a day will use (3,500watts x 12hrs) 42,000 watts or 42 KWhs of electricity. To figure out the cost of this active appliance, we need to talk about rates.

Rates are generally broken down into components or various charges, each of which is multiplied by that charges rate. So there isn’t just one charge that you can multiply by the number of kWh used for the month. Instead, you’ll see a list of individual charges; some even being less than a fraction of a cent per kWh. Multiply each of them by the kWh used, then add them up, and then that’s your total (not including any fixed charges).

Let’s start by looking at a very simple, easy to understand bill that has just one charge; a  supply charge. In the bill shown below, the supply charge for each KWh is $.093400. Multiply that by the total amount of electricity  used that month (27,680 KWh) and  the total supply charge is $2,746.89. In simpler terms, it’s supply rate multiplied by kilowatt hours to equal the supply charge.

There are two ways the utility could send out your bill. First, you could be charged based on monthly usage. You’ll receive a bill every month charging you for the number of kWh hours your household uses at that prevailing rate. Second, you could be charged based on your average yearly bill on what’s called a budget billing plan. In this case, your utility will look at  the number of kWh you used last year, divide it by 12 to find the average monthly cost,  and–assuming you’ll use the same amount the following year–bill you the average monthly amount. This allows customers to spread out the total costs of their electricity evenly over a year.

Here’s an example of a budget bill: 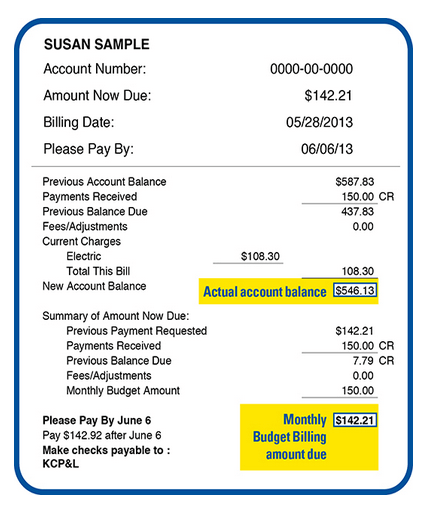 Now you may be wondering: what charges actually make up that cost? Because unfortunately, no, your payment is not only the electricity you use. It’s also for maintaining the power lines/grid and paying the people that work there. So many bills won’t be that simple. Instead, they will list multiple charges. So for most people, you should look for charges having to do with supply, delivery, taxes, and fees.

Let’s use this bill as an example: On top you’ll see a Supply Charge and a Delivery Charge. According to Eversource, the Supply Charge is “the cost of energy you use”. So if you’re on the Eversource standard service rate, Eversource will purchase electricity from suppliers on your behalf and pass that cost directly to you with no profit added. However, you’ll also see there is a Delivery Charge, and that charge has to do with funding grid maintenance and other customer services.

As you can see the first charge is a Customer Charge. This is the fixed cost that Eversource says covers costs like  with meter reading, billing, and administration costs. Next down is the Distribution Energy charge. Solect Energy defined this charge well: “Think of this as the charge for delivering electricity from the utility’s electrical substation, through power lines, to your home.”

Lastly, our favorites to talk about are the Energy Efficiency Charge and Renewable Energy Charge. These are there to help fund state programs like energy efficiency and renewable energy programs including the Mass Save program if you’re in Massachusetts.

These charges make up the electricity bill that comes to your house each month. Most of them are created by state regulations, since shareholder utilities, while public companies, are highly regulated businesses. The utilities fight to cover their costs and make the government allowed return on investment, while of course our government should be working to make sure that return is not excessive. After all, while you can in theory choose your energy provider (the Supply Charge noted above), you can’t change your utility.

Want to learn more about solar savings? Stay tuned for our next blog post: How to Read Your Electricity Bill – With Solar! If you liked this article, you may also like: