You just had your solar panels installation done and you have panel level electronics. That means you can see the electricity production of every panel. In fact, you can see power at any instant and the accumulated energy over time. But then you wonder, why isn’t each panel producing the same? There are several reasons why each panel won’t be the same. Let me explain…

Panel Manufacturing: The panels in the solar panels installation are the same, but they are not identical.

The solar cells come from large silicon crystal “ingots” that have been “grown” in a factory. (Think of your elementary school project of growing crystals, but on an industrial scale). From there, the crystals are sliced and trimmed into thin, square solar wafers. A couple of additional steps and they become solar cells.

That’s why at the end of the panel assembly line, there is a flash-test station. This station flashes each panel with a calibrated light source and the panel output is measured and logged.

Let’s imagine that we’re at the LG solar panel factory and we’re testing their “380” watt panel. If the panel tests tell us the panel is 379 watts, that panel from the solar panels installation will be put in the stack of “370-watt” panels. If the panel tests at 385 watts, it will be put in the stack of “380-watt” panels.  In fact, based on that panel’s specification, it can test from as low as 380 watts to as high as 391.4 watts and still be called a “380watt” panel. (In fact, the power specification for the LG-380 panel is 380 watts minus zero percent to plus three percent or 380 to 391.4 watts).

Thus, all of LG’s 380-watt panels are the same AND different. So, their energy production will also be the same and different.

Sun Exposure Variation: The shady side of things

Here’s panel production for a system that’s been operating for 9-years. While some of this difference can be due to manufacturing variation as described above, the bulk of the difference is likely due to variation in shading.  In fact, if you notice, all the panels on the west end (left) are producing slightly less than all the panels on the east end (right) That tells me that there is less shade on the array in the morning than there is in the afternoon.

And here’s the actual roof. Remember that 2.71 MWh panel on the lower left corner? Turns out it is shaded in the afternoon by the dormer roof of the addition (which was being built around the time we installed the solar). And the trees on the west side are closer to the house than the trees on the east side.

Temperature: Not everything is cool

Did you know that solar panel electricity production is a function of the panel temperature? As solar panels heat up, their output goes down (and as they cool, their output goes up).  The temperature effect is not huge, but it’s enough to make a difference. We use this temperature effect all the time when we are sizing inverters (the devices that convert the panel direct current to household alternating current).  If there is any temperature variation across the solar array, the cooler panels will produce more electricity contributing to uneven electricity production.

We don’t get much soiling here in New England because both snow and rain clean the panels. But soot from a chimney, pollen, bird droppings, and other debris can affect panel performance. And that debris is unlikely to be evenly distributed across all the panels in your array thus causing differences in panel production.

Here in New England for maximum solar production, the ideal angle is about 37 degrees (it varies a bit as you move north or south), and the ideal azimuth (heading) is 180 degrees (due south). In 15 years of selling solar systems, I’ve “met” two ideal roofs (and we put solar on both). Every other roof is less than ideal. But how much less is a function of how much the roofs vary from those ideal angles and azimuths.  So, if you have panels with a mix of tilt angles and mix of azimuth angles, the output of the panels will be different.

There you have it. The top five reasons for variation in electricity production among “identical” solar panels. 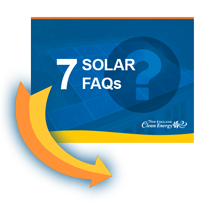 
You asked, we answered—from solar costs and ROI to roofs and the installation process. Receive answers and guidance to your biggest solar questions in our free PDF. Get your copy today.